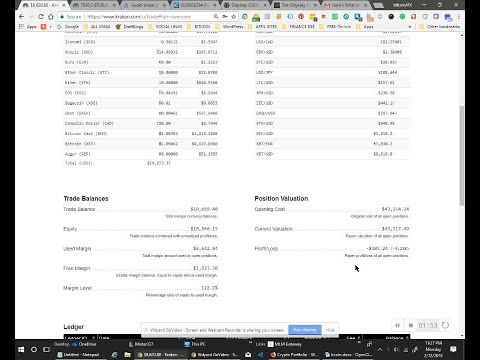 BitcoinAll comment: Coinbase is a kiosk. Kraken is a trading platform with advanced orders, margin, and alternative crypto-currencies. It really depends on what you want to do.. Join the conversation!

Everyone please, I would seriously advise you to stay away from exchanges that have predatory practices that take advantage of new users and first time depositors, because they have no other way to make money. An exchange that is functioning properly makes money on either their trading fees or their spread. I am writing this to all the new people that are looking for bitcoin exchange/broker options in Canada.
There are certain things you should look at and if the exchange in question has any or a combination of the following I would suggest you stay away, as the practices of these exchanges are the reason they are running on fumes and I would not like to see anyone on here get caught in another exit scam.
Right now in Canada, there are two highly rated exchanges that have the best history with almost no complaints on reddit (or any that seem to be of valid concern). They are Shakepay and Newton, which function much the same but their own unique properties and services. I am bi-partisan on what exchange you choose because they both have solid foundation, very good history and customer reviews and highest volume, but stay away from anything but them at this point is my advice to any newcomers reading this.
Edit: Although Kraken is technically based in the US, they are a very reputable exchange and service Canadian clientele, I'm just referencing exchanges based I'm Canada right now.
Edit 2: If an exchange has deposit or withdrawal fees, they should have a good justification for it, such as VERY low trading fees or margin account, cover mining fees or anything that you can logically see that would absorb this cost.

Crypto Banking Wars: Will Coinbase or Binance Become The Bank of The Future?

Can't wait days for your deposit to be available for trading? Margin buy can help!

Let's say today I see bitcoin dropping, and I want to stack some sats!!!
But a bank transfer takes 3 to 5 days.
How do I gain exposure to the exchange rate right now?
Well, some exchanges, such as Gemini, will let me buy bitcoin without waiting for the bank transfer. I can't withdraw that bitcoin, but I at least I can get exposure to the BTC/USD exchange rate immediately.
Or I can buy immediately at some overpriced online store, or bitcoin ATM even, and get the coins today. But paying an 8% premium means even if the bitcoin exchange rate rebounds, rising by 6% by tomorrow, I am still underwater on that purchase.
Nope -- that's not ideal either.
Bu you cant, if you have the ability and willingness to expose yourself to a little risk, use margin trading to grab the BTC at the price where it is today, and then later when your fiat transaction clears, close or settle that margin long position and end up with BTC itself that you can then withdraw.
Here's an example. Today I have an account on Kraken and have margin trading enabled. I have a balance of $100 USD. I could then buy a 0.055 BTC position on margin (~$500 USD), which puts me in the position of 5:1 leverage. My $100 USD gave me $500 of buying power (5:1 can also be referred to as 5x leverage).
Then I begin my deposit of $500 to Kraken. When that's available later, I then "settle" the position. The $500 I deposited is used to settle, and I can then withdraw the 0.055 BTC (less some small fees). If if the BTC/USD price rose to $20,000 two days later, I could still settle to receive the 0.055 BTC with just the ~$500 that arrived.
The risk in doing this, of course, is that what if the exchange rate were to have a flash crash, ... e.g., down to $7,000? Well, then my margin position would have been insufficient for such an occasion, and my position would be liquidated and I would lose my $100 USD that was used as collateral.
So I'm sharing this in case it is useful to others -- especially those struggling with slow deposits using funds from their bank.

How to degen (America Edition)

It’s been a while since my last ramblings, however I have something special for you guys. Before, very recently, I thought Kraken was the only way in Murcia’ to gamble away my earnings and further perpetuate my perma losses—through the wonders of accessing margin. After, countless api errors, stupid trades, and getting cucked on gains—I finally got the courage to stand up to Kraken and withdraw what was left of my diminished bag.
I was a free man—no longer beholden to 5x max leverage on a select few coins. I yearned for more, much more, I heard of tales of of a mythical exchange far far away, with little KYC, access to upto 100x leverage on futures, and the ability to trade on a margin with shitcoins; all while being completely ‘regulated’ and ‘legal’ in the US. I couldn’t believe it, I didn’t believe it—so like most downtrodden traders, I downloaded a VPN and tested my luck on FTX.
FTX was great but I yearned for something more, more mature, more features, and more margin. Only if there was a place. After searching, and searching, and searching, I see an of all things an ad, an ad on Brave, an ad for what I’ve been looking for—the exchange of my dreams.
Upon clicking on this magical advertisement and after sacrificing a goat to the ad gods—I was enchanted to see headlines such as “access up to 100x leverage on BTC options” (gasp); “access up to 10x margin on dozens of coins” (gasps again) and finally the tip of the iceberg—“You can start trading with out being verified” (came in pants). At this point you might be thinking, what is this magical exchange—my fellow Americans degenerates—welcome to KuCoin.

Hey, traders!
I'm new to daytrading and have a question I cannot seem to find a solid answer to on Google. Please forgive me if this is a ridiculous question...
What exactly is the difference between a 'buy' and taking a 'long position'?
The only difference I can find is that I am able to trade with margin when taking a position but not when placing a 'buy order.'
Are there other differences?
Context: I am currently trading crypto using Kraken because I don't have a large enough account to meet the "Pattern Day Trader" requirement. I am trying to learn the basics of trading through this experience, with the aim of building a large enough account in the future to begin trading stocks.
Again, please forgive me if this is a stupid question.
Thank you!

Question regarding fees. Also need someone to review my recent trade decisions

1. Fees affecting my decisions
If my target is 1.5%/1% P/L. Should I keep my position in most cases untill one or the other happens? I had many opportunities to sell on 0.3-0.5% profit but I'm trading crypto and maker fees would put me on breakeven slight loss or profit that doesn't really justify the risk taken or even if I want to take what i'm given I still wait for the confirmation candle and by the time it closes my profit potential is gone. Feels like i'm missing out on many opportunities to make a number of small trades while waiting for larger increase. So I keep the position and couple times already that resulted in stop loss. That I know I could avoid
I also wonder are fees just as brutal on forex market? On kraken maker pays 0.016% + 0.002% for margin call. I don't trade with much, only $600 i don't expect to make money, best I hope for is to break even but those crypto trading fees really make it confusing to see If I'm making any progress at all
2. Review of my trades
I'm completely new to this my plan is to document my trades and ask people what i could do better.
overall look at a chart: https://i.imgur.com/bOe0tzZ.png
closer look: https://i.imgur.com/MCjLLy7.png

As the 4th Bitcoin Gaining Cycle Comes, How to Maximize Your Profit and Avoid the Risks?

Background:
By reviewing the bitcoin market movements last month, the bitcoin price on Nov. 1st was $9,054. When the end of Nov came, the bitcoin price dropped to $7,318.
As the historical trend of bitcoin has gone, the bitcoin price has been through 3 cycles of gaining:
​
After reviewing the gaining cycles of the bitcoin price until now, the corollary that we are now going through the fourth cycle.
Just as the financial history repeats itself, the percentage of holding bitcoin more than 12 months has decreased to 40%, which is similar to the situation that the last time the bitcoin price boomed to $1,000. We can easily draw a conclusion that the decentralization of bitcoin holding means that the trading demand of bitcoin is increasing. And when the bitcoin trading becomes diversified with the bitcoin finance derivatives became more and more robust, more and more financial institutions and personal investors will enter the bitcoin market. Thus, in the next period, the bitcoin price will present an uptrend in total.
So, how to achieve the benefit maximization and avoid the risk when the fluctuations happen in this period?
​
Hedging is definitely an important part you should plan for your bitcoin trading. With hedging work for your trading, you will avoid the risk of holding a bitcoin but the price drops in some time.
For example, 3 weeks ago, the bitcoin price decreased from $8,150 to $6,665, if you hold 1 bitcoin, then you would lose $1,485 during this decline. However, if you chose bitcoin derivatives such as futures or options to buy a contract for BTC Short, then you will save $1,458 loss when the bitcoin price dropped.
Here are two solutions I’ve mentioned above: Futures&Swap, Options.
Here is how it works:
When you hold a 7-days put contract, if bitcoin price drops from $8,000 to $7,000, you will earn $1,000 profit, and in total, your loss of the bitcoin you hold will be hedged because you earn $1,000 from BitOffer Bitcoin Options.
What if the bitcoin price rises from $8,000 to $9,000?
You will lose $200 with the 7-days put contracts you buy, but you still earn $1,000 with the bitcoin you hold.
BitOffer Bitcoin Options, the best hedging tool ever, is now the easiest and cheapest hedging solutions you can see in the market.
Ending:
With an effective hedging strategy, I deeply trust you all should be able to maximize your profit and avoid the risk even the bitcoin market fluctuates acutely like always.